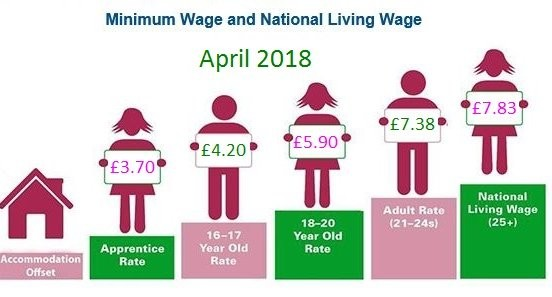 Wage rates for all ages including apprentices will be going up on 1st April 2018, including the largest increase in a decade for the rates that apply to 18 to 20 and 21 to 24-year olds. The Low Pay Commission estimates the new rates will boost the earnings of between 260,000 and 360,000 young workers.

The National Minimum Wage is the minimum rate of pay per hour someone is entitled to by law and depends on a worker’s age and if they’re an apprentice.

From 1st April 2018, the following National Minimum Wage rates will be:

In any given pay period a worker’s pay must not fall below the Minimum and Living Wage rates. An employer who fails to ensure this could be faced with financial penalties and may be named and shamed in a government press release. We have seen examples of well-known employers hitting the headlines for paying below the Minimum and Living Wage rates*; so ahead of the increases in April, it is worth checking your payroll process and consider the main common payroll related mistakes that should be avoided:

Changes to Pension Contributions from 6 April 2018