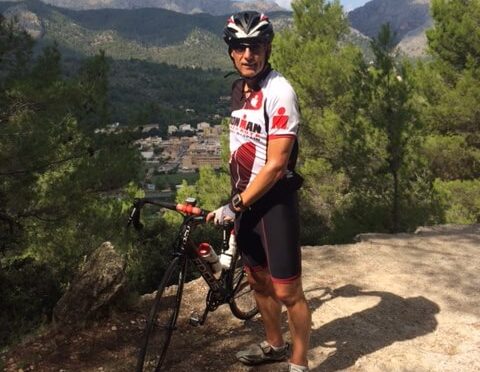 Mark Grewer is not a man to shy away from a challenge.

In May 2013, Mark pushed his fitness to the limits in the Lanzarote IRONMAN Triathlon, an unrivalled test of strength, character and fitness.

This epic feat, which bears the motto, “Normal limits do not apply”, included a 2.4-mile swim, a 112-mile cycle ride, and finished with a full-length marathon. Ninety-nine competitors dropped out during the competition but Mark completed the challenge in an impressive 13 hours and 58 minutes.

Mark says: “The event was amazing. There were parts that were extremely tough both physically and mentally. The 20mph winds made the bike ride even more difficult than it already was, but it was the marathon that really tested me. To finish was my goal, but to do it in less than 14 hours exceeded all my expectations. The moment when you finish is like nothing I have ever experienced before.”

Mark has not only signed up for his second Tri challenge: this year’s Columbia Threadneedle World Triathlon in Leeds on 12th June 2016. On 28th and 29th May he will ALSO be cycling 460 miles from London to Edinburgh in 2 days, climbing 16,000 feet!  He will once again be raising vital funds for Martin House Hospice.

Martin House provides family-led care and support to children and young people with life-limiting conditions, both at its hospice in Boston Spa and in families’ own homes. The charity provides symptom control, respite care, community care, end of life care and bereavement support to families across North, West and East Yorkshire and will soon be celebrating its thirtieth year as a leading provider of children’s hospice care in the north of England.

Last year, over 550 families across the region were supported by Martin House and Mark is already hard at work raising sponsorship towards the charity’s £5 million running costs. Mark explains: “I was blown away by my first visit to Martin House.  Seeing the facilities there and talking to some of the care team was a moving experience, especially as I’m a parent myself.  I was immediately motivated to raise money for the hospice, and it is the thought of the amazing work they do that motivates me to train and complete the challenges I set myself.”

If you would like to help Mark raise £5,000 for Martin House, why not visit his fundraising page?