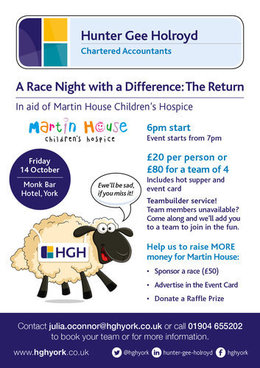 ‘A Race Night with A Difference’

The Charity event will be held in aid of Martin House Children’s Hospice based in Boston Spa, Wetherby.

About the Charity Event 2016

Hunter Gee Holroyd Chartered Accountants host a charity event every year for local businesses to attend, which has raised over £55,000 over the years. This year’s event, which will be held at the Monk Bar Hotel in York.

Hunter Gee Holroyd invites teams of 4 from local companies to join them for a fun evening of networking, racing and breakout team games. The event will start at 6pm with the first race scheduled for 7pm.

How you can support the fundraising:

If you would like to support the event, Hunter Gee Holroyd are looking for businesses to:

The event will include a supper, tombola and raffle with prizes generously donated by local companies.

All prize donations are gratefully received! If you would like to donate a prize or sponsor a race, email: julia.oconnor@hghyork.co.uk or call 01904 655202.

Nigel Atkinson, Director said: ‘‘This is a great opportunity for businesses to have a fun team night out, enjoy some informal networking with other local businesses and to raise money for a worthy local charity. We would like to thank all the businesses who are supporting us in running this event, including Monk Bar Hotel, SevenVideoProductions and Fusion Design. We hope to raise more than £3000 again this year, so please come along and join us on 14 October 2016.”

Why not view the video of last year’s event on our youtube channel: 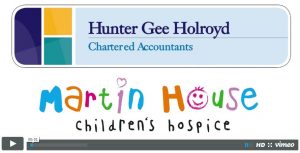 Martin House is a children’s hospice in Wetherby, West Yorkshire, England. It provides care and support to families in which there is a child or children with a short life expectancy. Donations to the hospice provide family-led day-today care for children with life-limiting conditions. Care, such as symptom control, emergency care, respite care and terminal care, is provided at the hospice or the family home. Conditions treated include long term progressive disorders such as Duchenne Muscular Dystrophy, Batten’s Disease and Cystic Fibrosis, and sometimes cancer.

For more information about the event, please contact julia.oconnor@hghyork.co.uk,  call 01904 655202 or book online